Ab has long since been into his sports and fitness. Back in the 80’s Ab was a serious runner, competing Nationally but was told by doctors after developing arthritis he couldn’t continue.

Following that time, over the years Ab got into cycling, entering a 150-mile cycle race in Italy around the Dolomite Mountains. He shares “it was on an old steel Halfords bike”, cycling uphill constantly for 3 to 4 hours. Ab came 3rd of the GB athletes who went, and within a week got a call from the British Cycling Team asking if he would like to train for a World record attempt from Land’s End to John O’Groats. Reluctantly he turned it down. “The training regime was horrendous – up at 4 am. Cycle for 3 hours” At the time Ab was already working long hours – 70-hour weeks, and simply didn’t have time.

And it was these long work hours and working away that eventually saw Ab reduce his exercise and put on weight. At his heaviest he was close to 17 stone. He now weighs in at just under 11.

Ab now cycles for a charity cycle club organised by UKATA in support of the Mavis Nye Foundation. He takes part in various cycle races throughout the year to help fund mesothelioma treatment research and raise awareness around mesothelioma, an asbestos-related disease. Last year, following a 15-year break from cycling, Ab completed a 100-mile cycle event, coming 7th, the fastest 7th position since 2017. A few weeks later Ab decided to upgrade his bike for a lightweight version to climb Watlington Hill in Oxfordshire to compete in the Everest Challenge – Pick any hill, anywhere in the world and ride repeats of it in a single activity until you climb 8848m.

The challenge for Ab was to find a faster, lighter bike. He admits he’d got about 7 bikes in the shed acquired over the years, and one he uses for his indoor trainer bought from Facebook Marketplace, but they didn’t fit the bill.

Looking on eBay he came across Coventry Bespoke Cycles. He purchased a Pinarello which on 6th June 2021 took him on his epic challenge successfully seeing him complete the Everest Challenge climb in a very impressive 16 hours 6 minutes riding up Watlington Hill an amazing 86 times.

Why You Chose CBC

He shares Iftiaz is “very user friendly. He knows what he’s talking about” and does his follow up.”

Ab was keen to share that Iftiaz provides the aftercare and support.

Ab like many of Coventry Bespoke Cycle’s customers, remain in contact. Ab trialled a pair a wheels for Iftiaz, and later ended up buying both the bike and the wheels sharing “It’s a faster bike”

How Did CBC Respond?

Ab has previous cycling experience but credits Iftiaz for helping with some of the technical aspects of his riding. “I’m a bit of a freak show” he says and go against the norm with the way that I ride. Going uphill it’s usual to flip up a gear. However, Ab doesn’t change gear half the time but that hasn’t stopped him competing against other club cyclists with their 10-15k bikes. “We get to some serious hills I just leave them on my max 2K bike”

You tell him what sort of riding you’re doing and what you want to achieve, and he’ll give you ideas of what bikes you’ll need

Ab has regained his fitness through cycling and has 8 races lined up this year. When talking about times, he admits “if you’ve got a better-quality bike it is going to help” and I’ve had no issues with the bikes from Iftiaz.

Ab has shed 5 stone over 10 months, from cycling and eating healthier. He is much stronger this year than he was during the Everest competition last time and is hoping to knock another half an hour off his time this year with his faster bike.

Successfully competing in the Lincolnshire National last year Ab shared how Iftiaz was a big support. He was asked to enter as a guest, 1 of only 10 guests to cycle alongside 200 top athletes in the country. And again, he excelled coming 72nd

Ab says “I’ve reached a point where I can now do this sponsorship thing this year and publicise Iftiaz as well. It swings in roundabouts. We help each other.” After taking up cycling Ab has seen great success, not only in his physical fitness, but mental health too.

Coventry Bespoke Cycles have proven their high-performance bikes are up to the challenge from dedicated cyclists like Ab racking up over 200 miles per week, and putting them through their paces.

Inspired? Make a start and uncover your strengths

Help support Ab and The Mavis Nye Foundation to raise money to help fund mesothelioma treatment research and raise awareness around mesothelioma, an asbestos-related disease that kills over 2000 people each year.

Hi, I’m Iftiaz. Founder of Coventry Bespoke Cycles. I work extremely hard to source high quality premium bikes. With the help of my dedicated team we ensure they’re serviced to the highest standard and reach you safely.

I hope you enjoy reading about my customers and their experience with us.

If you’re interested in purchasing a bike, or you’re looking for a particular high-end specification, please get in touch. 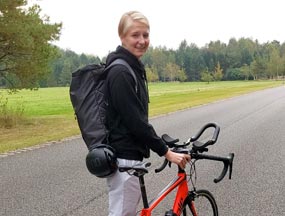 
We use cookies to optimise our website and our service.
Manage options Manage services Manage vendors Read more about these purposes
Preferences
{title} {title} {title}